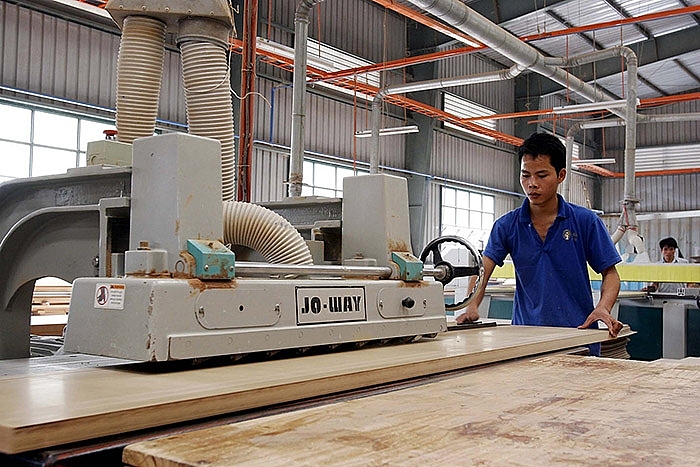 With the Comprehensive and Progressive Agreement for Trans-Pacific Partnership officially coming into effect for Vietnam on January 14, 2019, and amid the US-China trade friction, Vietnam’s wood industry is expected to swell its exports. However it still faces many challenges. Phuong Hao reports.

Though theoretically the Comprehensive and Progressive Agreement for Trans-Pacific Partnership (CPTPP) officially took effect on December 30, 2018, it is not until January 14, 2019 that the deal will come into force for Vietnam.

Experts believe this will be a big opportunity for the nation to boost exports across the board, including wooden products to the 10 CPTPP markets, which together account for nearly 13.5 per cent of global GDP, and a $10 trillion comprehensive market size.

Nguyen Ton Quyen, vice chairman of the Vietnam Timber and Forest Product Association (Vifores), told VIR, “The enforcement of the CPTPP will impact many stakeholders including those in the wood businesses, forest planters, wood traders, transport, and manufacturers.”

In recent years, such CPTPP member countries as Japan, New Zealand, Australia, Singapore, Canada, Peru, and Chile have been the potential consumers of Vietnamese wooden products. Some of them have strong wood industries, such as Canada which can boast an annual output of 600 million cubic metres.

“The CPTPP will help to facilitate the purchase of machinery, equipment, and technologies from developed countries such as Japan when tariffs are lowered, which will enable Vietnam’s products to become more competitive,” Quyen added.

Under the CPTPP, the country’s commitments to remove all tariff lines have been slower than other nations. Upon entry into force, almost all nations have to reduce tariffs for Vietnamese goods, such as Canada (94 per cent), Chile (95 per cent), Japan (86 per cent), and Mexico (77 per cent). However, the rate for Vietnam is only 66 per cent, which will be increased to 86 per cent over the next three years.

Quyen also expected that the ongoing US-China trade war will bring a boost to Vietnamese wood product exporters. Despite the existing 90-day trade war truce between the two superpowers, the already-applied duelling tariff increases will continue benefiting the Vietnamese lumber industry in the US market, while causing difficulties for it in China.

Additionally, the US has imposed a 10 per cent import tax rate on all Chinese wood products imported into its territory. In Vifores’ view, this will be of benefit to Vietnamese limber manufacturers.

Currently, the US is the largest importer of Vietnamese wood products, occupying more than 30 per cent of the nation’s total limber export turnover.

According to the United State International Trade Commission, China and Vietnam are the two largest suppliers of wood and wooden products for the US. However, due to the impact of recent relations, Vietnam is forecasted to surpass China to become America’s largest wood supplier.

During the first 11 months of the year, the value of Vietnamese wood exports to the US increased by 18.4 per cent on-year to 3.5 billion, well exceeding the $3.26 billion recorded last year, the General Department of Vietnam Customs reported.

Pressure on the rise

However, despite reaping profits from the US market, domestic producers are ironically suffering from stringent competition by made-in-China products domestically.

Specialising in woodwork production since 2004, privately-owned Hoai Giang Ltd. Co in the northern province of Hung Yen used to export wooden products to China. However, over the last three years, the company has not been able to export any containers to the Chinese market as traders have been physically entering Vietnam to purchase products themselves.

“Vietnam’s wooden products are much better than China’s in terms of quality. However, Chinese products have a unique technique that makes them eye-catching, with Vietnam’s products unable to compete. Even though their products have far higher prices, they enjoy big orders,” Pham My Hoai, director of Hoai Giang Ltd. Co, told VIR.

Technology is an obstacle, not only for Hoai Giang, but for most domestic lumber manufacturers. Therefore, many enterprises have considered co-operating with their Chinese counterparts in order to make use of their technologies.

With the recent impact of the US–China trade war, many Chinese businesses are considering shifting production to Vietnam in order to avoid paying heavy tax in the US. This will put a great deal of pressure on Vietnamese producers.

“Chinese wood businesses will redirect their raw materials exports towards Vietnam to hide their Chinese origin, then export the products under the ‘Made in Vietnam’ brand,” Huynh Quang Thanh, general director of Hiep Long Company, told VIR. “This can badly affect genuine Vietnamese products as they can face an anti-dumping duty with a rate of at least 10 per cent if the US wishes to impose it on products.”

In addition, domestic manufacturers have hit a snag regarding the origin of materials. Specifically, the EU and the US, which are the largest buyers of Vietnamese wood products, only import products that use 70 per cent materials licensed under the Forest Stewardship Council and 30 per cent original trace materials.

“This has made it difficult for wood and forest product processors. Having to use imported wood, the benefit for business is low despite a high export turnover,” a representative from Huong Mai, a company that trades wood products in the northern province of Bac Ninh, told VIR.

According to Nguyen Thanh Phong, Chairman of the Ho Chi Minh City People’s Committee, most domestic wood enterprises are either small or medium size businesses with limited knowledge of intellectual property.

Currently, Vietnam’s wooden products exported to the US, Japan, China, South Korea and the EU account for about 87 per cent of total export turnover, according to the Ministry of Agriculture and Rural Development.

At last week’s conference on agro-forestry-fishery development in Vietnam, Prime Minister Nguyen Xuan Phuc required that over the next 10 years, the industry must develop into one of the key hard-currency earners for Vietnam.

“Vietnam strives to become a world leading centre for manufacturing, processing, and exporting of wooden products. By 2025, the industry’s turnover must hit $18-20 billion,” PM Phuc stressed.